A Long Road to WNY – The Veterinary Journey of Dr. Spielvogel

by VEC | Dec 9, 2022 | 24 7 Emergency Veterinarian, Pet Hospital Near Me, Stories from the Team, Veterinary Emergency Room 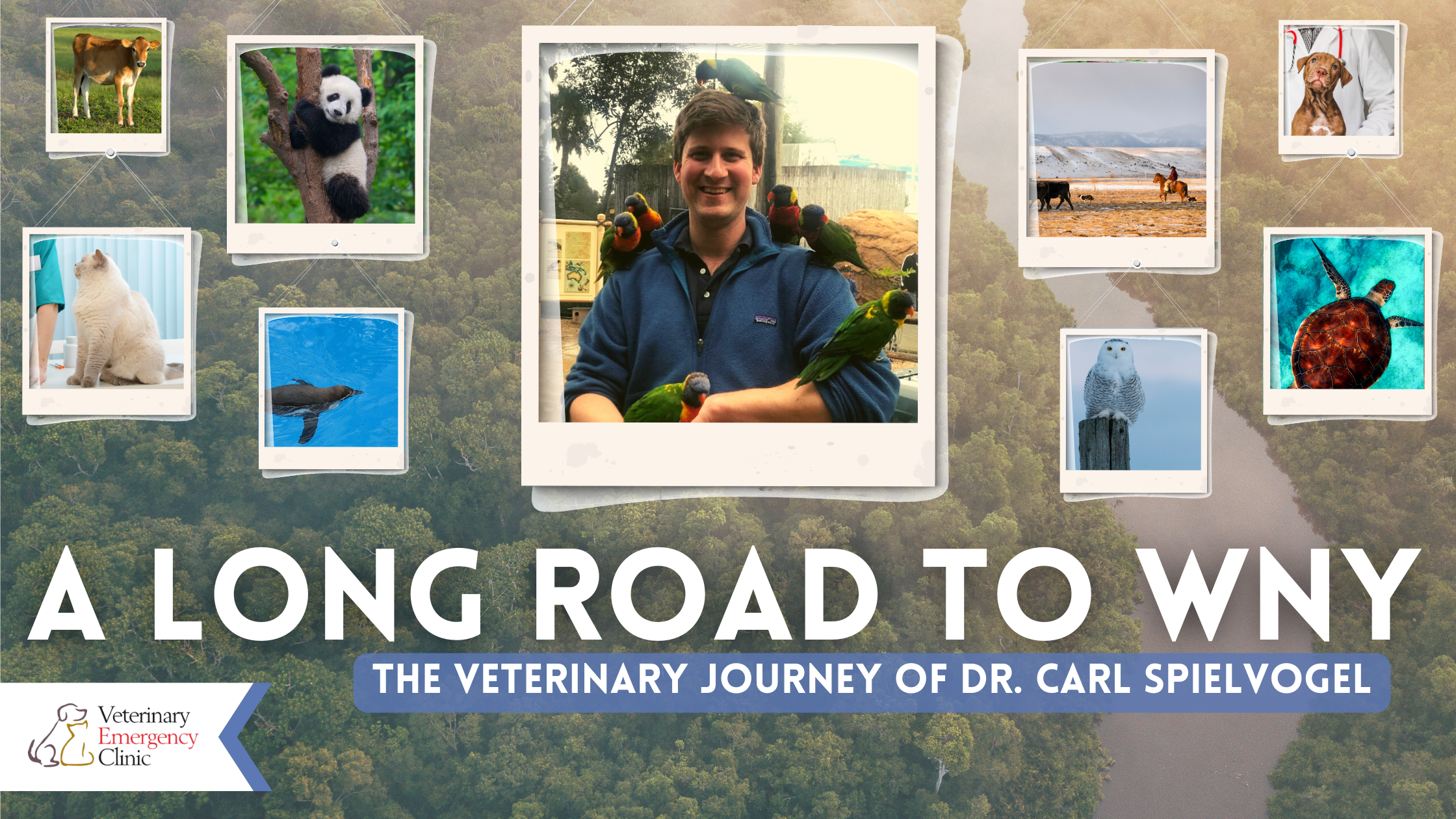 Stories from the Team

A Long Road to WNY – The Veterinary Journey of Dr. Spielvogel

Here at Veterinary Emergency Clinic, we are made up of a team of professionals who are committed to 100% emergency animal care. It’s not always easy working in the ER, and it’s not for everyone. We aim to always use this blog to help demonstrate our value in the community to provide tips and prevention to avoid emergencies, but today on the blog we wanted to shine a light on one of our bright veterinarians, Dr. Carl Spielvogel!

Dr. Spielvogel was recently featured in his alma mater’s campus magazine, where he was able to tell the tale of his veterinarian journey! Let’s take you through his remarkable winding trek from summer volunteering as a youngster, to the professional Emergency Vet he is today!

A Passion for All Animals

Before college, Carl spent summers volunteering for the New England Aquarium animal rescue team and interning at Woods Hole Oceanographic Institution, where he would be immediately inspired by veterinarians who used their talents to help animals.

During his time studying undergrad at Bowdoin University, he was able to spend a summer in China studying invasive tree species on the Wolong Giant Panda Reserve, which he credits to be “one of the most eye-opening experiences of his life.”

Out on the Range.

Before attending veterinary school, Dr. Spielvogel moved to Montana to work the night shift at a cattle ranch called the IX. It would be here where he would truly learn the cowboy life, working hand in hand with real cowboys, helping to manage a group of pregnant two-year-old Angus heifers, and assisting in their deliveries. In temperatures as low as twenty below, Carl would assist with cesarean sections, as the nearest veterinarian was a multiple-hour drive away.

Dr. Spielvogel credits the cowboys for their approach to ranching, which included much more than you might think. When you think of cows and cowboys, you might not think of data and analysis, but he would find that the ranchers monitored soil nutrient levels, considered genetics, monitored birthing outcomes and complications, and even graded the mothering abilities of cows to help guide the genetics of the fathering bulls.

He said the cowboys followed a strict moral code and taught him the importance of maintaining appropriate welfare for their cattle and working horses. These cowboys used no ATVs for herding, only ranching horses, as they are less stressful for the cattle. He said during cattle drives through the mountains, elk and deer would sometimes join the herd and come close enough to touch.

Oh, and he also learned you don’t ever get off your horse when crossing a river in freezing weather.

It wouldn’t be long until Dr. Spielvogel would be a certified licensed vet, but during his time at the University of Pennsylvania School of Veterinary Medicine, he would find he had only begun to learn what he loves to do. While learning about the mechanisms & metabolisms of medications for animals, he would be awarded a scholarship to perform research at the New England Aquarium’s Sea Turtle Hospital.

He would research the use of ventilators in cold-stunned sea turtles, and deliver a presentation on his research at the International Association for Aquatic Animal Medicine conference. It would be at this conference, he would meet his now wife Juli.

Now that Dr. Spielvogel was graduated and was licensed to practice veterinary medicine, he, his 2 cats, and his future wife moved to Massachusetts to work a one-year internship in a specialty and emergency animal hospital outside of Boston.

He spent time at both the New England Wildlife Clinic and the Aquarium of the Pacific, where he would get his first experience treating a variety of exotic and wild animals, along with performing his first-ever surgery on a wild bird. Alongside Juli at the aquarium, they were able to gain experience caring for all sorts of animals ranging from penguins and sharks to seals and sea otters!

Following the internship, Carl would be accepted to a residency here in Buffalo, where he worked in a private practice caring for birds and exotic species. He would learn to treat animals like parrots, snakes, frogs, turtles, emus even falcons! Part-time on his days off, he also worked for the Aquarium of Niagara, initially caring for their penguin colony.

One of his favorite patients – a female snowy owl whose wing he repaired after she was hit by a car.

He says that after all the years, he can see now that his work is not just about the animals’ care– it is as much about their humans.

“I have treated eighty-plus-year-old parrots that have been with their now-elderly owners since they were children. I have worked with police dogs and their canine handlers, who rely on each other to safely execute their duties, and I know an army medic who owes his life to a dog that shielded his unit from incoming bullets in Afghanistan.”

It is this raw passion for helping animals, pets, and their human owners through the most tumultuous of times that makes Dr. Spielvogel an incredibly valuable member of our team. Day in and day out, Dr. Spielvogel commits his passion to the WNY community, overcoming adversity and facing challenges head-on, and we can’t thank him enough for his servitude to the pets and families of Western New York.

Dr. Spielvogel was able to reunite with a few of his friends in Durango, Colorado, where his once colleague Juli and he would be married. They continue to work together at the aquarium, and are expecting their first child in March!

“I am so excited to be a father, and I have been spending every minute of my free time scraping, hammering, or painting, making the house perfect for our new baby. We love western New York and enjoy camping, kayaking, fly fishing, and hiking along the many rivers, gorges, and waterfalls in the area. I can’t wait to introduce my son to the many creatures who share this world with us.”

We are so proud of our team here at VEC, and it’s Vets like Dr. Spielvogel that will provide the future of veterinary medicine with a leader to look up to and emulate. Stay tuned to the blog for more helpful tips and stories! Remember to follow us on social media for regular updates and info! If and when emergency strikes, our team will be here if and when your regular vet isn’t.

No comments to show.